This is a book of 4 wonderful Christmas novellas. These are all Amish stories that are connected by a single night in December. The main characters of each story were born on December 1 in an Amush birthing clinic in the town of North Star.I loved every story and they were all wonderful. The four stories are Guiding Star by Katie Ganshert, Mourning Star by Amanda Flower, In the Stars by Cindy Woodsmall and Star of Grace by Mindy Starns Clark and Emily Clark.

I did not want to put any of the stories down. This is such an uplifting set of Christmas novellas.

I received this book from Bloggingforbooks for a fair and honest opinion. 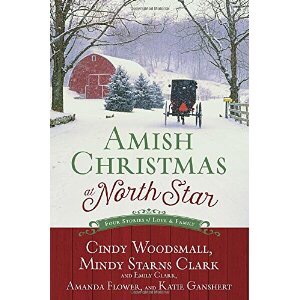 One night four lives entered the world by the hands of an Amish midwife, just outside North Star, Pennsylvania. Rebekah s Babies, as they are called, are now grown adults and in four heartwarming novellas each young person experiences a journey of discovery, a possibility of love, and the wonder of Christmas. “Guiding Star” by Katie Ganshert Curiosity gets the best of Englischer Chase Wellington when he investigates the twenty-five-year-old disappearance of an Amish baby. When he finds adventurous Elle McAllister in Iowa will his discoveries upend her world? “Mourning Star” by Amanda Flower Eden Hochstetler slips from her parents fudge shop to investigate the death of her friend Isaac. Who is guilty? Isaac s handsome great nephew Jesse, an angry Englischer, or someone else? “In the Stars” by Cindy WoodsmallHeartbroken Kore Detweiler avoids North Star after Savilla Beiler rejects his love. But when he is unexpectedly called to return home, he and Savilla must join forces to keep a family together. “Star of Grace” by Mindy Starns Clark and Emily Clark Andy Danner left North Star to join a new Amish settlement in Mississippi. His little brother devises a scheme to bring Andy home for Christmas and unwittingly unleashes the power of forgiveness in a reclusive widower s life.”CINDY WOODSMALL is a best-selling author of several works of Amish fiction and a non-fiction book. MINDY STARNS CLARK is a bestselling author of both fiction and nonfiction, coauthoring the Christy Award-winning The Amish Midwife. Her daughter EMILY CLARK is an MFA student. AMANDA FLOWER authored the Amish Quilt Shop mysteries as Isabella Alan and received an Agatha Award nomination for Maid of Murder. Christy Award winner KATIE GANSHERT is the author of A Broken Kind of Beautiful, three other novels and two novellas.